We are delighted to announce that AIMA’s 2019 Global Policy & Regulatory Forum will be taking place in New York City.

This is AIMA’s leading annual regulatory event, which provides a unique opportunity for the hedge fund industry to engage with senior policymakers and regulators. This year’s event is devoted to the theme of Technology, Innovation and Change. Over the course of the day, we will explore how technology is transforming everything from investment decision-making to supervision and compliance.

We will look at the rise of sustainable investing and examine how alternative investment managers tackle environmental, social and governance factors in their trading decisions.

We will also consider the latest trends in outsourcing, highlighting the regulatory implications regarding emerging trends in structure hedge fund operations. The event will also shine a light on current enforcement priorities for regulators in the USA and further afield.

Further information will be available in due course.

For any queries, please email events@aima.org 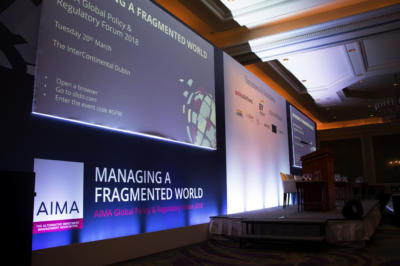 This year we welcomed some notable keynote speakers, including Deutsche Bundesbank board member Andreas Dombret, Michael D’Arcy, Minister of State at the Irish Department of Finance, and Conor O’Kelly, CEO of Ireland’s National Treasury Management Agency, all of whom provided insightful comments and provoked lively debate. As usual, the event was held under the Chatham House rule, but some of the key areas of discussion are summarised below. Dr Dombret’s speech is also available online.

Once again you could be forgiven for thinking Brexit-related announcements were timed to coincide with AIMA’s annual GPRF, with last year’s forum being held days after the UK Government invoked Article 50. This year the event was held two days after the 21-month Brexit transition period was announced, which prompted plenty of discussion among delegates; it was clear that nearly two years on from the referendum, cross-border concerns still weighed heavily within the alternative investment industry.  Dr Dombret delivered a passionate speech, highlighting that countries should avoid panic and “not to embark on nationalism” that would “only lead to trade wars and a race to the bottom.” He stressed his view that mutual recognition was off the table as it would undermine the ability of supervisors to address financial stability concerns effectively. The associated panel discussion explored the potential ways to ensure that UK investment managers can continue to service EU investors, as well as the implications of the recently-announced transition period. There was a broad expectation that progress towards an overall Brexit agreement would be slow and that regulatory uncertainty would remain a reality for the time being. Some panellists felt that the prudent course of action for firms was to assume a no-deal scenario and prepare on that basis.

Accountability higher up the agenda

Fears that the UK’s extended Senior Managers & Certification Regime is aimed at taking the scalps of senior managers have now eased. Industry is now gearing up for implementation of the new regime, whilst also turning its attention to broader questions of culture. In their discussion of the differing perceptions of the right culture, speakers explained how firms needed to understand what culture they wanted and compare that with what they had. To do this they needed to look at leadership at every level – experience in managers did not automatically translate into effective management – as well as considering how governance, incentives (including non-financial ones) and HR practices could influence outcomes. Recommendations included addressing cultural issues at appraisals, understanding how likely whistleblowing was and ensuring protocols were in place to allow whistleblowers to remain anonymous. The panel also explored the role of fund directors and whether directors were spreading themselves too thinly. It seems there are no easy answers to determine an adequate time commitment to enable a director to deliver effectively on their responsibilities. 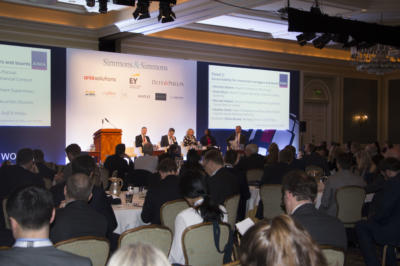 Panellists provided an insight into global work on leverage, looking at the different approaches that are on the table and their benefits and shortcomings. There remained disquiet on the part of some audience members that global work on leverage is still too focused on what has been done in the banking sector, with one member of the audience asking whether the focus on leverage in the fund management context is justified.

Tech coming to the fore

Cryptocurrencies have in recent years gained in prominence and attracted the attention of the media, broader public and now regulators. At the GPRF, AIMA announced it has now set up its own Digital Asset Working Group. Speakers highlighted that cryptocurrencies present opportunities but also come with their own unique set of challenges, including cyber security and the fact that they continue to evolve in a rapid fashion. This creates additional challenges in the regulatory context: how do you effectively regulate this space when the main distributed ledger technology firms are developing in different directions? Naturally with increasing and high profile cyber-attacks, cyber security was also a prominent discussion point. Panellists warned firms to take seriously their responsibility to ensure data is secure, regardless of whether functions were outsourced or remained in-house. Regulators expected firms to document cyber protection processes and keep records, but there was recognition that it might take an obvious breach for authorities to become aware of shortcomings. The next, most immediate challenge was to comply with the General Data Protection Regulation that comes into force on 25 May 2018.

Our panel featuring investors and consultants, as well as an asset manager, agreed that communication was key to a successful relationship between investors and managers. Increased discussions between them had already delivered greater alignment of interests and had allowed investors to better understand their managers’ performance and to take a long-term outlook. Equally, when constructing a portfolio, one investor said they stayed away from managers who couldn’t explain when performance was good, as they were unlikely to be able to explain when performance was bad. Another investor agreed and noted the importance of transparency and also due diligence in the asset allocation process. There was a willingness to buy into a particular strategy rather than focusing on short-term performance. Yet, they identified situations where managers had moved away from their strategy brief as industry became more innovative. There was an acceptance of this provided this had been communicated properly. The best managers were defined as those that could generate ideas that added value to the portfolio and didn’t focus on raising too many assets. Fees too were debated. The industry was providing flexibility around fees as exemplified by longer lockups or a “zero and 30” model.