Blog: What did we learn at AIMA’s 2020 Global Policy and Regulatory Forum?

AIMA’s 2020 Global Policy and Regulatory Forum took place over 19-20 November 2020, for the first time ever in a virtual format. Here are some of the main takeaways:

More detailed observations on the event are provided below, along with the results of audience polls.

There is a widespread view that the UK asset management sector has had sufficient time to prepare for the end of the Brexit transition period. While there is concern over the readiness of smaller investment managers, many stakeholders have devised plans for the post-2020 landscape. In a poll of the audience, a level of optimism was found. While firms felt that there may be challenges after 31 December, 80% of respondents believed that any disruption would be manageable and non-material. 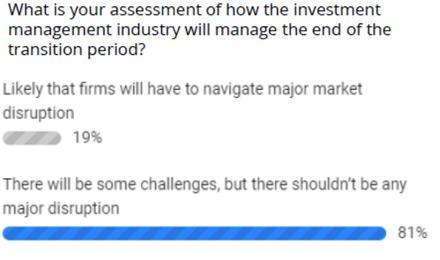 UK investment managers are taking various approaches to access EU investors after the end of the passporting regime. For firms that rely on EU marketing, steps have been taken to manage their positions - the most effective being setting up an EU base with marketing staff. However, those that do not prioritise continued marketing have adopted a long-term “wait and see” approach. Other approaches include applying for cross-border licenses or relying on reverse solicitation and issuing “line in the sand” letters to prospective investors. Beyond marketing and raising new assets, the continued ability to delegate asset management activities is regarded as key for financial stability, and the industry welcomes the European Securities and Markets Authority and UK Financial Conduct Authority’s actions to maintain this in the immediate term.

As the UK departs from EU rulemaking, the panellists considered how the UK’s future ruleset will develop. Areas such as the RTS 28 reporting obligation were cited as needing improvement, though a wholesale change of the UK’s rulebook is not expected. The UK looks to effect an outcomes-based convergence of rules, tailoring current rules to the UK market while having a global outlook. The panel’s audience were divided in their views. 56% expected UK rules to become more flexible and proportionate over the medium term while an almost equal number expected UK rules to remain as demanding as they currently are. 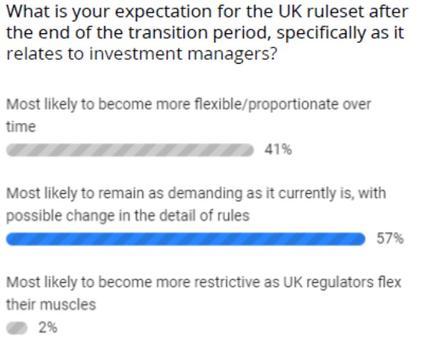 The panel concluded with a focus on the sector’s current priorities. A few key concerns were highlighted: retail investor access to unsuitable and high-risk alternative products, market abuse, LIBOR transition and liquidity management.

In a wide-ranging discussion of current US regulatory priorities, the panellists noted that inter-agency collaboration has been a key driver in delivering regulatory efficiency to industry participants, something that was accelerated by the COVID-19 outbreak and the resulting transition to working from home. Panellists mentioned the exchange of exam observations to prevent duplication of efforts, as well as the recently adopted changes to the CFTC’s Form CPO-PQR which were strongly supported by the NFA and now align with its NFA Form PQR.

The panellists also noted the value they derive from the industry’s input into their rule-making processes and stressed the importance of the industry informing the Agencies’ views on the practical effects rules could have on managers, small or large.

The panellists also discussed the March market turmoil and the wider industry repercussions still to come. During the initial outset of the pandemic, the various US agencies provided welcome regulatory relief on firms’ filing obligations and exchanged information with each other to support the financial markets, which has led to a strengthening of the relationships between the Agencies. The panellists closed off by applauding the industry’s response to the turbulent March events which can, in large parts, be credited to the measures put in place after the global financial crisis which has given the Agencies greater access to relevant and timely market data.

Leverage and liquidity in the fund space

This panel sought to analyse and dissect the roots of the market turbulence experienced in March, trying to understand which segments were hit the most, and why. The main takeaway from the session was that no individual cause can be pinpointed, but rather a series of events deriving from a heterogeneous shock which caused several key parts of the markets to be dysfunctional, if not to shut down entirely. The ability of dealers to effectively perform their function; concerns around money market funds; the rapid redistribution of liquid assets following margin calls; leveraged positions being unwound in US Treasury markets: all these elements are now being scrutinized by supervisors to try and avoid another situation in which central banks have to perform massive asset repurchases. 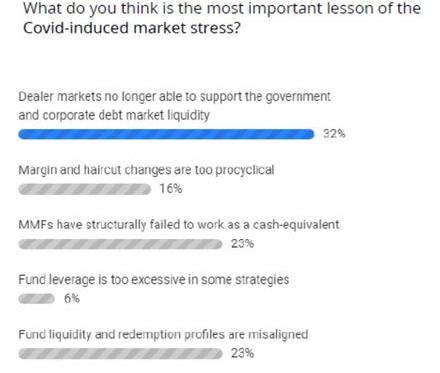 During this crisis, however, the fund industry has shown in general a good level of resilience, not experiencing huge levels of redemptions or market failures. Panellists noted the need to further analyse how investors have behaved, and what will be the medium- to long-term consequences on the segments that have experienced the highest levels of drawdowns.

As regards the use of leverage, IOSCO is supporting its member jurisdictions with implementation of its recommendations for leverage measurement, and will issue a first pilot report in Q1 2021 based on the first set of data gathered under the new framework, which should serve as a basis for comparison purposes over the next few years. The EU is itself looking at issuing its new guidance on the operationalisation of Article 25 of the AIFMD – i.e. the ability for a supervisor to put a cap on the use of leverage. This guidance is not expected to impose a blanket limit to the use of leverage across all EU funds, but rather to provide an approach based on the assessment of a large and diversified number of metrics, including the market share of the fund or its liquidity profile.

In the next few years, supervisors will continue, at a global level within the FSB and IOSCO framework, to seek to improve the overall resilience of the non-bank environment, including looking at the adequacy of the existing liquidity management tools.

2020 has been an eventful year for the EU. From Brexit to the short selling bans, EU regulators have had their hands full.

Perhaps no topic, however, has captured as much attention as the EU Sustainable Finance Disclosure Regulation (SFDR). The panellists noted that the SFDR is part and parcel of the EU’s broader action plan on sustainable finance. The goal is nothing less than reorienting private capital towards ‘sustainable’ investments, and thus reshaping the EU economy. As one panellist put it, with perhaps a degree of understatement, that goal is ‘ambitious,’ but the problem—climate change—is ‘huge.’ The panellists noted that investors increasingly expect investment managers to have thought about ESG, and argued that SFDR would thus help attract investor capital to the EU. Some, however, expressed concern over the speed with which the regulation is being implemented, especially since the technical standards will not come into effect until 2022; there was also broad agreement that more needed to be done to ensure the availability of quality ESG data.

Turning to AIFMD, the panellists agreed that the current regulation works relatively well. As such, the AIFMD review would not need to be extensive. Rather, it would be a matter of fixing discrete issues. The panellists noted that both passporting and delegation are important, useful provisions, and that while there may be questions asked about them, neither are likely to be subject to any serious changes. 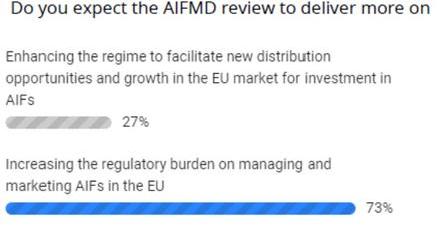 The panellists also discussed the so-called ‘MiFID quick fix.’ The panellists acknowledged that, at present, EU capital markets cannot match their American counterparts for depth and liquidity. There is a particular need, one panellist argued, to increase retail participation in the EU’s capital markets, especially given the need for capital occasioned by the COVID-19 crisis. The question of whether MiFID ‘overburdens’ investors with information was raised, as was the need for a consolidated tape for both equity and non-equity assets. Most of all, however, the need to be pragmatic with any revisions to the regulation was stressed. Finally, one panellist noted that the revisions seemed to be proceeding slowly, despite the fact that there seems to be consensus on what needs to be done.

The final panel of the day offered the opportunity to hear directly from industry stakeholders and to reflect upon what lies ahead for the industry in a time of regulatory uncertainty. Panellists felt that under a new US administration, US-based asset managers can likely expect a greater focus on enforcement than under the previous administration, as well as a continued emphasis on re-evaluating policies towards China. Additionally, the theme of ESG and responsible investment is likely to increase in importance and face increased regulatory pressure moving forward. Finally, thinking globally, panellists believed that the change in US leadership will affect transatlantic relationships, notably putting pressure on the UK Government to reach a Brexit deal.

In Europe and the UK, stakeholders on both sides are facing the possibility of a deteriorating relationship and inconsistent regimes. Panellists noted that this outcome would ultimately hurt the ability to efficiently deploy capital on a cross-border basis, effectively taking the regulatory framework back in time. For the UK asset management industry and regulators alike, panellists agreed the challenge ahead lies in developing a regulatory framework that does not simply chase the EU regulatory approach, but that instead reduces compliance costs and allows the UK to remain competitive. While there may not be a consistent view on what a solution should look like, all panellists agreed that stakeholders would benefit from a smooth transition to ensure that the end-investors who benefit from the investment services provided are better off post-transition. Fragmentation, illiquidity and increased costs for investors should be prevented under any circumstances. This is where AIMA should and will be involved most actively to ensure that our industry’s best interests are well represented.